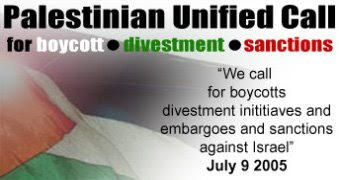 Hang Up On Motorola

Organize in Your Community

Israel's recent war on the occupied Gaza Strip brought death and destruction to Palestinians, and a windfall for war profiteers. Around the world, people are standing up and saying "No more" by boycotting and divesting from corporations that profit from Israel's human rights abuses.

The people of Stockholm have severed their contract with the transit/waste removal corporation Veolia due to <http://salsa.democracyinaction.org/dia/track.jsp?v=2&c=lZ4%2BUV52BwUItiw5bqmkZGfeLcW6J2uC>Veolia's involvement with Israel's settlements, and British Telecom company <http://salsa.democracyinaction.org/dia/track.jsp?v=2&c=%2B6AlQWYh%2FoxyYg%2F6gTJLXmfeLcW6J2uC>FreedomCall has ceased their cooperation with Israeli counterpart MobileMax due to the war on Gaza.

Join this growing global movement for boycotting, divesting from and sanctioning (BDS) those who support Israel's military occupation of Palestinian territories by <http://salsa.democracyinaction.org/dia/track.jsp?v=2&c=Cg9Op5rvmqJUskweoelqL9wn%2BSw9xm6j>becoming an organizer for our Hang Up On Motorola campaign. Motorola makes a lot more than cell phones - they also make at least four <#products>products that directly support Israel's occupation of and assaults on Palestinians. This is why we've created a <http://salsa.democracyinaction.org/dia/track.jsp?v=2&c=f0K7PdBYqCsxA5lA%2ByOXiGfeLcW6J2uC>tool-kit for boycotting Motorola until its products are no longer used by Israel to abuse Palestinian human rights.

British Students in Solidarity with Gaza

Warwick University students have claimed a space on campus as an act in solidarity with the innocent victims from the Gaza conflict, and with the other groups in the UK which have taken similar action.

1. Warwick University should suspend all relations with companies which supply the Palestinian-Israeli conflict. This includes BAE Systems, MBDA, QinetiQ and Rolls Royce.

2. That the University expresses its sorrow for the infringement of the right to education in the Gaza conflict, by releasing a statement to this effect, and by donating old computer equipment and textbooks to those universities in Gaza that were partially destroyed during the current Israeli military operation.

3. That the University fund and provide logistical support for a series of talks on the Israeli-Palestinian conflict.

4. That there be no legal, financial, or academic measures taken against anyone involved in or supporting the sit-in. This extends to the Student's Union. Students involved should be guaranteed free movement in and out of the space.

Other universities in the country, including Birmingham, Essex, SOAS, LSE, Sussex, Oxford, Leeds, Manchester Met, Kings and Bristol have already seen occupations. Others are planned and will start at any moment.