Why We Protested at Vassar

This is one of a number of responses to what happened at Vassar when an Israeli speaker, Hen Mazzig, was protested last week.

On Thursday November 14, at 5 p.m., around 25 members of Vassar’s Students for Justice in Palestine chapter along with other students gathered on the third floor of Rockefeller Hall to voice our opposition to a talk by Hen Mazzig titled “The Indigenous Jews of the Middle East: Forgotten Refugees.”

The stories of Mizrahi Jews and their struggle both outside and within Israel deserve attention. But those of us who demonstrated believed this talk would be little more than pro-Israel propaganda, given Mazzig’s record.

Mazzig served for five years as a commander in the Israel Defense Forces. While Mazzig served as a “humanitarian officer,” the military he served has killed thousands of Palestinians in the last few decades alone. Given what we gleaned from Mazzig’s previous talks, we felt certain he would ignore the IDF’s practice of torturing, imprisoning, harassing, demolishing the homes of, cutting resources off from, and murdering the Palestinian people, as well as multiple UN condemnations of the IDF’s human rights violations. Instead, Mazzig paints the Israeli military as a progressive gay haven with his coming out story.
This tactic folds into a larger strategy used on the pro-Israel right that’s been coined “Pinkwashing” — the tactic of diverting attention away from the occupation of Palestinian land, the dispossession of Palestinian rights and property and the miserable conditions of life in Gaza under blockade, by focusing on Israel as LGBTQ-friendly; Israel has made a concerted effort to brand itself as “an international gay vacation destination.” Meanwhile, Palestinian queer liberation organizations like Aswat, Al Qaws and Palestinian Queers for Boycott, Divestment and Sanctions have spoken out against Pinkwashing; as the director of Al Qaws put it, “When you go through a checkpoint, it does not matter what the sexuality of the soldier is.”

It’s not just his gay identity that Mazzig uses. He likes to champion “intersectionality” and his Mizrahi identity, but he has a penchant for attacking intersectional leaders. He has attacked Linda Sarsour and Congresswoman Ilhan Omar, as well as other supporters of BDS, specifically targeting SJPs across the country with insults and false information.

For these reasons, we felt it was appropriate to voice our dissent from those who chose to invite Mazzig. This is how we did so:
We remained in the hallway for the duration of our demonstration, holding signs which included phrases like, “Stop Pinkwashing,” “Resistance is Not Terrorism,” “Free Palestine,” “Don’t Normalize Zionism” and “Palestinians are Indigenous.” We played music by Palestinian artists, passed out flyers explaining our position, and spoke with attendees.

Only a handful of students attended the event, outnumbered greatly by administrators, professors, and staff. At around 5:40 pm, we began chanting outside the doors of the talk. We yelled, “From the river to the sea, Palestine will be free,” “How do you spell justice? BDS!,” “From Kashmir to Palestine, occupation is a crime,” “Stop the killing, stop the hate, Israel is an apartheid state,” and “When I say free, you say Palestine! Free - Palestine!”
The chants lasted for about seven minutes before we all left the building and the talk went on.

Although we do not believe that Zionism should have a platform, especially not one funded by our student government, we did not prevent anyone from attending the talk or stop Mazzig from speaking.

But despite our concerted to effort to allow him to speak, Mazzig proceeded to smear us on social media. After the talk, Mazzig tweeted that one of these chants, “From the river to the sea, Palestine will be free,” had been “used by Hamas when they call for the genocide of all Jews.” He said we chanted for his death.

This absurd and intentionally incendiary claim was based on the myth that “From the river to the sea” was originated by Hamas. This is untrue, and was a clear attempt to discredit critics of Israel as “Hamas terrorists.”

The phrase is a popular slogan among a wide range of Palestinian resistance and nationalist groups. And for us, freedom for Palestine certainly does not translate to the genocide or dispossession of all Jews. It is a demand for total decolonization, for a recognition of the right of return, and for the dismantling of an unequal regime.

The conflation by Mazzig and others of anti-Zionism with anti-Semitism is itself an anti-Semitic tactic, as it falsely represents the Jewish community and tells them what they ought to believe. This misrepresentation erases the brave work of many Jewish people who actively speak out against Israeli apartheid, including many members of SJP at Vassar.

False accusations of anti-Semitism directed at activists acting in solidarity with Palestinians distract from real instances of anti-Semitism. When people like Mazzig hurl these accusations, they are doing so in order to escape legitimate criticism and to divert attention away from the injustices carried out by the Israeli government.

We do not hold Jewish liberation and Palestinian liberation as antithetical to one another but see the struggles as intertwined. We believe it is both possible and necessary to stand against anti-Semitism and to stand with the BDS movement and the Palestinian fight for freedom.

But our college sided with this smear against us. In the early hours of Friday, November 15, Vassar College President Elizabeth Bradley released a statement indirectly addressed our protest. “A group of students disrupted the speaker by chanting outside the lecture hall for some time,” she wrote in a statement. “People who were in the lecture expressed that the chanting was intimidating and hard to listen to. The words have been associated by some people with anti-Semitism.”

While we understand that some who attended the event felt that the protest was, as Bradley put it, “intimidating and hard to listen to,” we are steadfast in our belief that this discomfort was necessary and does not compare to the actual situation in Palestine, where 70,000 Palestinians must cross Israeli Military Checkpoints on their commute to work every day, and over 50 Israeli laws discriminate between Jewish and non-Jewish citizens of Israel.

In the few days since our student government approved funding for Mazzig’s talk, Israeli forces have killed 34 Palestinians and wounded hundreds of others. Fighting against Israel should only intimidate those who have a stake in devaluing Palestinian lives, and like those who fought against apartheid in South Africa, we see ourselves on the right side of history.

There is no “sense of belonging” on a campus that brings a speaker who promotes racist ideology and has a history of attacking students in SJP chapters. There is no “flourishing of opposing ideas” when the Israeli government is cutting off two million Gaza residents from access to clean water. There is no room for “diverse viewpoints” around the shooting and bombing of unarmed Palestinians. There is no “free exchange of ideas” to be had about the forced dispossession and ethnic cleansing of Palestinians.

Ezra Mead is a junior at Vassar. He is submitting this oped on behalf of the members of Students for Justice in Palestine at Vassar.

The reign of terror we fund 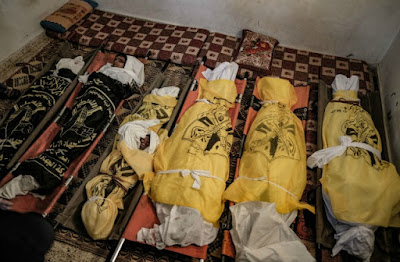 The reign of terror, which we help fund, goes on. In the last two days of airstrikes over the open-air prison that is Gaza, where two million beleaguered people, almost half of them children, are packed and trapped, Israel has killed at least 34 Palestinians and injured more than 111. Many of the victims were children. The dead included eight members of the Sawarkah family - three adults, five kids - killed around midnight as they slept in their house.  The only survivor of the slaughter of the Sawarkahs was a month-old girl named Marah; her mother, father, aunt and siblings were all buried in the rubble. A relative, Taleb Mesmeh, said that when people heard the explosions, "We never expected (they'd target) a civilian home that looked like any normal house.” The retrieved bodies "were torn into pieces, and there was blood everywhere," he said. “This is Israel targeting children inside their homes.” Then he began picking some children's school uniforms from the rubble. "This is Mo’ath's school uniform," he wailed. "She was still in first grade. What did she do to be killed?”