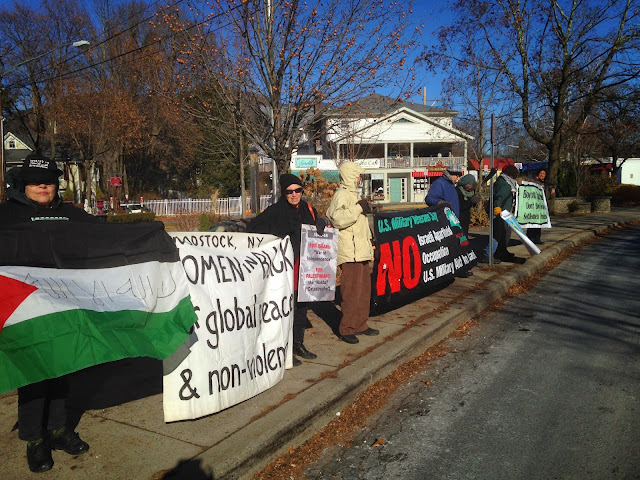 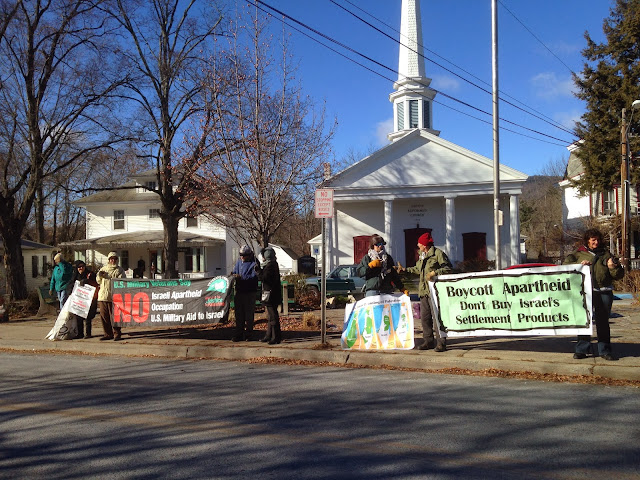 Paul, the flyering went well. We gave out all of our flyers (Fred had made 120). We could have used more, but had no idea that some 300? people would show up for the talk. It was a standing room only crowd - mostly folks from the Poughkeepsie Jewish community, but there were some students too. People were a little confused about the flyers - some thought they were programs for the talk. It looked as if everyone read them and they were discussing the questions that were on the flyer. Often we are clearly the opposition when we give out materials, but in this case it was not so obvious and in some strange way the flyers may have gotten more attention and more consideration.

Fred, thank you for your comprehensive and thoughtful summary. I agree with you that Mr. Halevi gave a "masterful performance." He seemed like such a reasonable, compassionate, and genuinely likable guy - very articulate and wonderfully expressive about his pain, the aspirations and anxieties of "the Jewish people," and some thoughtful sentiments about the Palestinians. I actually found myself lulled into some sense of acceptance of his "narrative." Unfortunately, there are some serious distortions and misrepresentations in his story.

I think the primary omission to his version was alluded to by Jane's question which was moving in the direction of - "What about the daily, relentless, brutal oppression, and humiliation of Palestinians in Gaza and the Occupied Territorites? What about the huge disparity of power?" Mr. Halevi alludes to the need for both sides to sit down and work this out (without outside pressures) as if these two parties were somehow equals. It's hard for the Palestinians to talk when the boot of Israel is firmly planted on their throats! Mr. Halevi conveys the heartfelt desire of Jews who never lived in Hebron to return to Hebron, but seems to have little understanding of the Palestinians desire to return to land, farms, homes, and villages from which they were forcibly removed in recent memory.

It was also interesting to note that Mr. H would toss out the concept of "justice" in order to settle the problem. If fact, he stated that "justice" was getting in the way of a settlement. I would have been very interested to hear Mr. Halevi describe what he thinks would be a "fair" two state solution, since he indicated that Jews could return to that Jewish state and Palestinians could return to their "new " state.

All in all, a good evening. But the best part was seeing, being and acting with all my MECR friends.