Outside the CVS in Kingston, NY

Nine of us located ourselves outside the Kingston CVS. There was plenty of car traffic, but few on the sidewalks, so we decided to have some of us offer flyers to the stopped traffic.

The first car was a good omen. The driver, who looked like he was from the Middle East, thanked us profusely for what we were doing. To our surprise, most drivers accepted flyers, and some even thanked us. After an hour, we had passed out almost all our flyers, the 220 we had come with.

Cars stopped for the light, however, can be dangerous. We had to be especially careful not to go into the second lane of traffic if the first lane was still moving. It made watching the light and being aware of other cars very important. 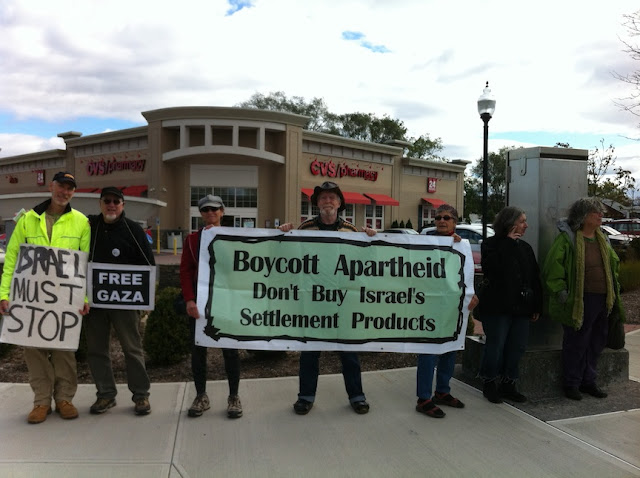 One of us stood outside the door of the CVS and passed out flyers to those entering and leaving. We have never tried to do this before, but there was no objection to the person being there. We decided to do this at every future BDS action at CVS.

Our meeting with the assistant manager was cordial and informative. She had read the letter we had sent to the manager and seemed aware of our issue. She said that she would let the CVS management know about our rally and about the fact that we planned to do another in front of the store.

Were people generally more apt to accept flyers because of Occupy Wall Street? That might be what was going on, since several people we talked to naturally made the transition between how Palestinians were being treated and how they were being abused by employers and by the system. One talked about having to hold four jobs to pay for her house. Do people now think that all protests are a good thing? Or do they see the links between the suffering of the Palestinians and their own economic mistreatment? The latter would be an amazing leap in public awareness.

Second BDS action in front of the Rhinebeck CVS

Five of us went to Rhinebeck this Sunday, Oct. 2. We handed out 125 flyers, and over 50 cards. There were some who came up to argue the traditional Zionist line, but the discussions were not as heated as last time. The best talks were with people who didn't know what the settlements were. They were open to something that they had never heard before, and sometimes willing to do something about it. The women below went back into the store to exchange a settlement product she had just bought. Here she is giving a "thumbs up." 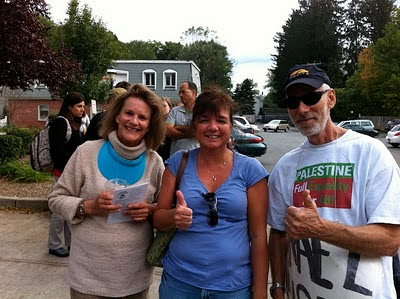 The CVS store manager came out at one point and we gave her a flyer. We had talked to her at the first action. 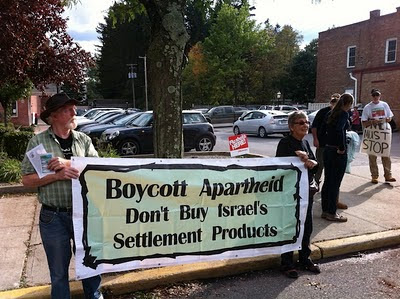 The sign got a lot of attention from cars passing by. 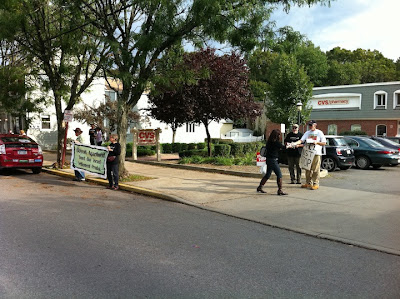 Lisa discussing the CVS boycott with two people across the street. 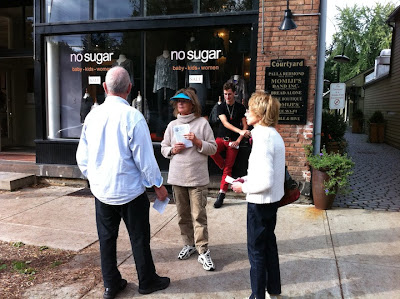