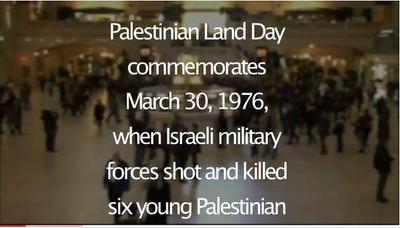 A little something to make you smile as we embark on the: Global BDS Day of Action

Dear Friend,
Not sure if you know about Ahava Dead Sea Laboratories—it’s an Israeli company that makes bath salts, sun screen, foot scrubs and other high-end products sold in pharmacies and department stores. Ahava promises “Beauty Secrets from the Dead Sea.” But wait until you hear those secrets!
Because Ahava is hiding the ugly truth—its products actually come from stolen Palestinian natural resources in the Occupied Territory of the Palestinian West Bank, and are produced in the illegal settlement of Mitzpe Shalem. Don’t let the “Made in Israel” sticker fool you—when you buy Ahava products you help finance the destruction of hope for a peaceful and just future for both Israelis and Palestinians.
Ahava puts a pretty face on its crimes, even paying Oxfam Ambassador and “Sex in the City” star Kristen Davis to be its spokeswoman. But here’s what Oxfam itself has to say about Ahava’s deceptive packaging:
"The settlements on the West Bank are illegal under international humanitarian law and that creates a lot of problems for the Palestinians that live there.”
"Consumers that are buying produce that are grown in illegal settlements need to have that information so that they can make an informed choice."
Don’t the facts about Ahava make your skin crawl? For instant relief visit CODEPINK’s www.stolenbeauty.org today, and sign up to help get the word out to Kristen and our communities—real beauty is more than skin deep!

Leading advocates of an academic boycott of Israel have stepped up their campaign calling for an "outing" of Israeli universities which support their government's policy on the occupied territories.

Nearly 300 academics from around the world have published an open letter calling for leaders of Israeli universities to lay their political cards on the table and reveal whether they support the government's policies on the border conflict.

One Israeli academic said the move echoed the days of "McCarthyism" in America.

The letter, which is addressed to Professor Menachem Magidor, president of the Hebrew University of Jerusalem, and "members of Israel's forum to combat the academic boycott", says that Palestinian universities are being severely compromised. "Harassment, arrests, random shootings and assaults" are carried out regularly by Israeli troops on Palestinian campuses, it claims.

The letter also calls for an international public debate to be held at an Israeli institution. Among the signatories, who hail from 12 countries including Israel, are Andre Brink, the South African novelist, Ronnie Kasrils, minister of water affairs and forestry of South Africa, and Hilary and Steven Rose who were among the first in the UK to call for the boycott. Mona Baker who caused a row after she sacked two Israeli academics from a journal she edited after signing the original petition two years ago is also on the list.

Hilary Rose said: "I'm hoping that this will re-open... and deepen the discussion of what is happening to the Palestinian academic system at every level - schools are shut, universities are shut, the military enter the campuses at will; it is a completely impossible situation."

"It's about outing Israeli academics and saying you can't actually pretend that this isn't going on."

She said that the recent assassination of the Palestinian resistance group Hamas's founder and spiritual leader, Sheikh Ahmed Yassin had "intensified" her belief in the boycott and added that they were calling for a public meeting so people could see that such a meeting would be impossible for Palestinian academics to attend in the current climate.

Professor Nachman Ben-Yehuda, of Hebrew University's sociology department, said that there was no formal forum discussing a response to the boycott, but that members of the university were monitoring the boycott and approaching individuals taking part in the boycott to discuss the issues. He said the letter harped back to the days of McCarthyism.

"I have no desire to go back to the days of McCarthy where people had to sign forms to say whether they were loyal or not.

"We should isolate this conflict [the border conflict] not escalate into other parts of public life. If people want to go against the government, that's fine, but what do they want from Israeli academia? Israeli academia is not the Israeli government."

He added: "Did such a letter go to Harvard to ask whether they support Bush in Iraq? If academics have to come out and say what they believe in why just Israel? Why shouldn't they ask the LSE [London School of Economics] if they support the Gulf war? Why just Israel?"

The debate over the academic boycott of Israel has raged for the past two years since two petitions, one calling for an out and out boycott and the other for a moratorium on EU research funding to Israel, were established. Further petitions opposing the boycotts have since gathered thousands of signatures.

US Campaign to End the Occupation

Ten days ago, folk music legend Pete Seeger announced his support for the boycott, divestment, and sanctions (BDS) movement to compel Israel to comply with international law and human rights.

Less than a week later, Pink Floyd musician Roger Waters also joined the campaign, urging fellow artists to do the same and comply with the cultural boycott. He explained:

"Where governments refuse to act, people must, with whatever peaceful means are at their disposal … For me it means declaring my intention to stand in solidarity, not only with the people of Palestine, but also with the many thousands of Israelis who disagree with their governments racist and colonial policies, by joining a campaign of Boycott, Divestment, and Sanctions (BDS) against Israel."

Join Seeger, Waters, and thousands of others around the world in taking the next step in BDS. Are you ready to do the same? This March 30th, Palestinian Land Day, will mark the third annual global BDS Day of Action. There are lots of ways you can take part, including media engagement, house parties and direct action.

Do you want some talking points to strengthen your BDS activism on March 30th and beyond? Have you struggled with handling tough questions and criticism about BDS?

If so, check out our new BDS FAQ page!

On the new page, you can read talking points compiled from BDS advocates around the world in response to common misguided questions like "Why are you singling out Israel?" and "Won't BDS hurt Palestinians?"

One member of the Coalition to Stop $30 Billion to Israel had this to say:
"BDS ruffles feathers, as it is intended to do. This resource has gathered the most frequently used criticisms of boycotting Israel and provides an extremely handy and succinct list of rational and persuasive responses activists can use to defend the validity of BDS as a tactic for social justice. We should read and reread this invaluable list."

A primary organizer in the University of California at San Diego divestment campaign wrote:
"During our campaign, this resource was very helpful in guiding conversations to where they needed to be. We even printed copies for each of our council members to consult."

Israel is feeling the pressure of BDS. On Monday, the Israeli parliament approved the first reading of a new anti-boycott bill, which would impose harsh fines on Israelis who call for academic or economic boycott. 50 Israeli organizations appealed to the Knesset to stop the bill and many more continue to join. Let us continue to join with those working through nonviolent means to end Israeli occupation and apartheid.

As you organize this March 30th to keep the pressure on, we hope the US Campaign's new resource will help strengthen your efforts in promoting BDS as a strategy grounded in universal values promoting freedom, human rights, and international law in Palestine/Israel.