Airbnb rentals in the illegal settlements

http://www.justforeignpolicy.org/act/airbnb-no-vacation-rentals-west-bank-settlementsThanks for all you do for justice,Robert Naiman, Avram Reisman, and Sarah BurnsJust Foreign Policy

Defending freedom of speech in NYS

A law being proposed in New York would create an official blacklist of supporters of the Palestinian-led boycott, divestment and sanctions movement.

Legal experts and activists say the measure is reminiscent of the McCarthy era and could have drastic consequences for individuals, organizations or firms who engage with the campaign to pressure Israel to respect Palestinian rights.

Anti-BDS legislation was also introduced this week in California. Two New York bills — one introduced in the state senate and another in the assembly — would require the state government to “develop, using credible information available to the public, a list of persons it determines boycotts [sic] Israel.”


Individuals or entities included on the state’s blacklist would be barred from partnering with state agencies unless they can demonstrate in a written statement that they are “not engaged in boycotting Israel.” State pension funds would also be prohibited from investing in institutions that have divested from Israel.

Activists with the Palestine Solidarity Collective in New York are collecting signatures for a petition to lawmakers against the bill. Nearly two dozen North America-based activist organizations are opposing the legislation.

The New York bills are “the most egregious, most McCarthyite, most obvious violations of people’s First Amendment rights,” Josh Ruebner, policy director for the US Campaign to End the Israeli Occupation, told The Electronic Intifada.

If passed into law, the measure could hit local organizations that provide essential community services. Church groups, for example, that may belong to denominations which have passed boycott or divestment resolutions, often receive state funds to provide social programs such as homeless shelters and soup kitchens. “Does that mean that all these churches will become ineligible to feed the hungry?” Ruebner asked.

A separate resolution pending in New York, HR-567, would condemn the European Union’s decision to accurately label goods produced in Israeli settlements in the occupied West Bank and Golan Heights.

Law to make BDS a criminal act in NY

Law to make support of BDS a criminal act in NY

There is a law under consideration in New York State to make support for BDS and, actually, any public dissent against Israel, a crime.  This is ridiculous, but it sets a terrible precedent and everyone should sign the petition against it and forward widely.  There is a link to the actual bills on the website

Say No to Anti BDS Legislation in NY http://palestinesolidaritycollective.net/2015/12/13/anti-bds-legislation-in-new-york/
The legislation would create “A LIST OF PERSONS IT DETERMINES BOYCOTTS ISRAEL,” and defines boycotting Israel  as


“ENGAGING IN ACTIONS THAT ARE POLITICALLY MOTIVATED AND ARE INTENDED TO  PENALIZE, INFLICT ECONOMIC HARM ON, OR OTHERWISE LIMIT COMMERCIAL   RELATIONS  WITH THE  STATE  OF  ISRAEL  OR   COMPANIES BASED IN THE STATE OF ISRAEL OR IN TERRITORIES CONTROLLED BY THE  STATE OF ISRAEL.”


Who will it affect? Say No to Anti BDS Legislation in NY
http://palestinesolidaritycollective.net/2015/12/13/anti-bds-legislation-in-new-york/

Protest in front of a closed Leviev diamond store 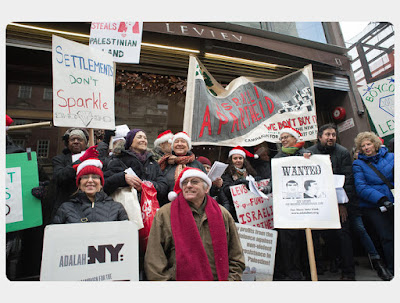 New York, NY, December 21, 2015 – On Saturday, for the second year running, 50 New York human rights advocates held a celebratory protest in front of a closed Leviev diamond store on Madison Avenue on one of the biggest holiday shopping days. Days before the protest, staff working for Israeli diamond mogul Lev Leviev had insisted his store would be open, per their publicized business hours. The Leviev store was also mysteriously closed the day of the December 2014 anti-apartheid caroling protest. This is the ninth consecutive year New Yorkers have gathered in front of Leviev’s store singing holiday anti-apartheid carols critical of Leviev’s construction of Israeli settlements on Palestinian land and human rights abuses in the diamond industry in Angola.
Newer Posts Older Posts Home
Subscribe to: Posts (Atom)