SodaStream to move factory out of West Bank Israeli settlement Palestinian activists have hailed a decision by SodaStream International, an Israeli-owned soft drink company, to close its controversial factory in a settlement in the occupied West Bank, calling the decision a victory for the campaign for boycott, disinvestment and sanctions.

The decision by the company, which sells its fizzy drinks maker in 45 countries, to move the plant to Lehavim in Israel’s southern Negev region was for “purely commercial” reasons and not connected to pressure from pro-Palestinian groups over its location, said SodaStream representative Nirit Hurwitz.

The actor Scarlett Johansson got caught up in a high-profile row over the factory earlier this year after agreeing to serve as SodaStream’s global brand ambassador – drawing fire from Oxfam, where she previously had a similar role.

The Hollywood star then cut ties with the charity, citing “a fundamental difference of opinion”. Oxfam opposes all trade from Israeli settlements, saying they are illegal and deny Palestinian rights.

“SodaStream’s announcement … shows that the boycott, divestment and sanctions (BDS) movement is increasingly capable of holding corporate criminals to account for their participation in Israeli apartheid and colonialism,” said Rafeef Ziadah, a spokesperson.

“[The] BDS campaign pressure has forced retailers across Europe and North America to drop SodaStream, and the company’s share price has tumbled in recent months as our movement has caused increasing reputational damage to the SodaStream brand.”

Let's keep the pressure up!

Yesterday, we visited 14 different stores near Union Square and asked them to stop selling SodaStream. At some, we spoke with managers who were receptive and said they would talk with the owners. At others, we were told there was a store policy not to discuss politics. At all, they now know that people are upset that they are selling SodaStream.

Let's keep the pressure up! This week, go to stores in your neighborhood and let them know that you want them to stop selling SodaStream. Give the owner or manager this letter (sign it from you or Adalah-NY), and then let us know how your visit went . You can use this to help you take notes to later send to us. For more information about SodaStream and why we're boycotting, see our SodaStream Fact Sheet.

Looking forward to hearing from you and working together to get SodaStream out of New York City stores!

Visit us online at adalahny.org or Contact Us.
Help support our work. Donate.

Adalah-NY: The New York Campaign for the Boycott of Israel 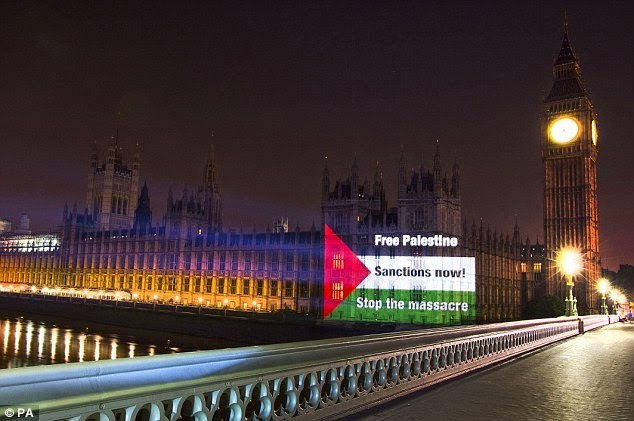 The UK Parliament voted in a landslide 274-12
on the evening of Monday 13th October to
unilaterally recognize the state of Palestine!