Attack on Vassar College and Department of Jewish Studies


"Majoring in Anti-Semitism at Vassar A number of events over the past two years have transformed a prestigious institution into a parody ripe for ridicule."


Please read the Wall Street Journal article, and then write or call President Hill with your message.

2. Charges based on unsubstantiated claims of anti Semitism are presented as the truth but without a recording or transcript of the presentation.

3. Dr. Puar was brought to Vassar by the Jewish Studies as well as several other department. It was supported by Vassar Jewish Voice for Peace on campus.

4. Authors of the WSJ article both work for Academic Engagement Network. From Haaretz: "NEW YORK – Enlisting faculty members at American colleges and universities as allies in the fraught battle against the BDS (boycotts, divestment and sanctions) movement is the main objective of a new organization that is being launched on Wednesday." In effect, the authors are being paid to shut down debate on college campuses.

6. The WSJ has become a typical Rupert Murdock publication, with writers being paid to distribute pro Israel propaganda, and articles full of rightwing, unsubstantiated charges.

7. A world class college like Vassar cannot afford being intimidated by these tactics. 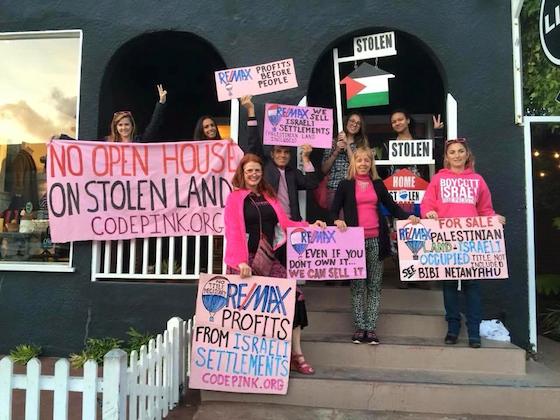 No Open House on Stolen Land!

While RE/MAX International is holding its annual convention in Las Vegas, its Israeli franchise, RE/MAX Israel, is continuing to sell homes in illegal Israeli settlements in the West Bank and East Jerusalem. RE/MAX’s profiteering and complicity have drawn condemnation from human rights activists around the world. A recent report from Human Rights Watch entitled “Occupation, Inc.”: How Settlement Businesses Contribute to Israel’s Violations of Palestinian Rights” directly indicting RE/MAX LLC, states that:
By advertising, selling and renting homes in settlements, both the Israeli franchise of RE/MAX and RE/MAX LLC, the owner of the global franchise network, facilitate and benefit from the transfer of Israeli civilians into occupied territory and the associated human rights abuses, contravening their rights responsibilities.

Think this is outrageous? Sign the letter to Dave Liniger, CEO, Chairman of the Board, and Co-Founder, Re/Max International, telling him to stop RE/MAX Israel's illegal sales of settlement homes on Palestinian land.