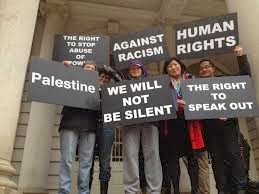 On February 3, NY State Assembly Speaker Sheldon Silver was forced to withdraw a draconian bill that would have undermined academic freedom and free speech. But - and this is critically important - our work to defeat this legislation is not over. Speaker Silver quickly issued a revised version of his bill, titled A. 8392A.  There is one difference between this and the earlier version: Previously a college could have lost its entire state funding for a year if they had used any of their state funding on groups that support boycotts of Israel. In the new version, the college would only lose the amount of money actually spent on such activities. Any attempt to withhold any amount of state funding is a direct assault on our constitutionally protected right to free speech. There is no "good version" of a bill that at its core is designed to punish acts of academic freedom or free speech.