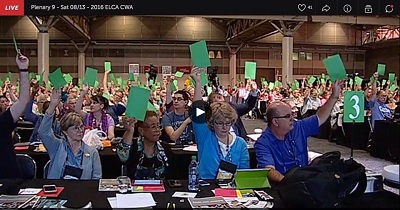 Huge news! Moments ago, the Evangelical Lutheran Church in America (ELCA) voted overwhelmingly (by an estimated 90%) to create an investment screen that would identify and remove the Church's investments in corporations profiting from Israel's violations of Palestinian rights, and other human rights abuses around the world. The new screen has a broad reach, ensuring that the Church would avoid investments in corporations currently complicit in human rights violations as part of the Israeli occupation, as well as any future corporations that become complicit.

ELCA marks the ninth denomination to engage in economic acts of conscience to support justice for Palestinians, following the Quakers, Mennonite Central Committee, United Methodists, Presbyterians, United Church of Christ, Unitarian Universalists, Catholic Conference of Major Superiors of Men, and the Alliance of Baptists -- many of those in 2016 alone!