WhatsApp has launched an unprecedented lawsuit against a cyber weapons firm which it has accused of being behind secret attacks on more than 100 human rights activists, lawyers, journalists, and academics in just two weeks earlier this year.
The social media firm is suing NSO Group, an Israeli surveillance company, saying it is responsible for a series of highly sophisticated cyber-attacks which it claims violated American law in an “unmistakeable pattern of abuse”.

Executive Council of the Episcopal Church

Mondoweiss:
"This week, the Executive Council of the Episcopal Church adopted a human rights investment screen related to Israel and Palestine and will sell its holdings in Motorola Solutions, Caterpillar, Inc., and the Israel Discount Bank.

This is the latest step in response to a July 2018 General Convention Resolution (B016) which committed the Episcopal Church to a similar process taken by the Evangelical Lutheran Church in America two years earlier. The action also follows steps previously taken by the Presbyterian Church (USA), the United Methodist Church and the United Church of Christ.

The human rights screen would bar Episcopal Church investments in 'any corporation that supports or benefits from denial of human rights in or through the occupation of the West Bank, East Jerusalem or the Gaza Strip.' ”
https://mondoweiss.net/2019/10/episcopal-church-bars-investments-in-companies-benefitting-from-the-israeli-occupation/

Oppose laws that would stifle our right to boycott

We made significant headway in the last year with supporters like you and growing programs and communications teams. During a right to boycott for justice campaign last month, we brought mainstream, progressive players into the fold like Credo and Greenpeace that had never spoken publicly on Palestine before.

Just yesterday, new poll numbers proved it’s not just Greenpeace: 77% of Democrats who are aware of BDS see it as a legitimate tactic and 72% of people in the U.S.—across party lines—oppose laws that would stifle our right to boycott.

The next step is to ensure the commitment to the right to boycott eventually translates into a commitment to the overall struggle for freedom, justice, and equality for the Palestinian people. We need your support to help us hold the ground we’ve gained. 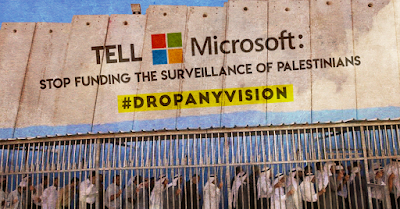 Microsoft has made a lot of noise recently about how they're the one tech giant taking ethical concerns about facial recognition & other surveillance technology seriously. They widely publicized a set of six "moral standards" they’d apply to funding and developing any such tech.1
Their multi-million dollar investment in AnyVision was made on the condition that AnyVision agree to those six principles. A month later, it came out that the Israeli army is using AnyVision's facial recognition tech throughout the West Bank.2
Join us in telling Microsoft: stop enabling the surveillance and criminalization of Palestinians living under occupation.
Newer Posts Older Posts Home
Subscribe to: Posts (Atom)